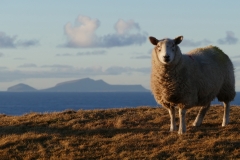 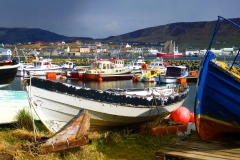 With around 1500 km of unspoilt coastline, and unrestricted access for walkers, Shetland has much to offer the visitor, from a quiet stroll across an empty pristine sandy beach, exploring rockpools, spotting seals and finding exciting things from the sea to more active walking along the spectacular coastal edge, with wild flowers in profusion in the summer months.
You can find more information on things to do in Shetland here.

Traditional crofting methods have enabled a range of habitats to be sustained, these are very diverse botanically and particularly valuable for wildlife.  Throughout the summer wild flowers are abundant and breeding birds teem in the heather hills.  Around the coast you’ll be able to see seals, seabirds and occasionally if you are lucky whales are possible.  Orca’s are increasingly seen around Shetland, even in Lerwick harbour.  You can see puffins from April until early August.

Throughout Shetland there are many sandy beaches, extensive cliff scenery and rolling moorland.  Although the sea might be cold you’ll be able to find beaches where you are the only people.

There is archaeology everywhere, from Iron age houses and brochs, including Mousa Broch, the most complete example, and Viking houses.  You’ll see the remains of old crofting settlements with houses, watermills and boat noosts where narrow wooden fishing boats were hauled up, and enclosures defining the fertile cultivated land from the wilder hill land used for grazing.

Don’t be put off visiting Shetland out of season, you’ll have fewer daylight hours but a chance to see the Northern Lights if you are very lucky.  Winter brings it’s own charms, with spectacular stormy scenery and wild walking.  Many community events happen in the winter, especially the fire festival of Up Helly Aa held in Lerwick on the last Tuesday of January.  Other communities also hold their own, smaller, fire festivals from January until March.  You’ll also have cosy cafes and restaurants and the speciality shops in Lerwick to visit. 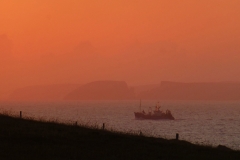 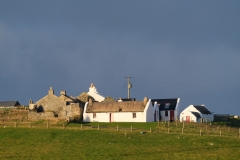 East and West Burra are thin rocky islands which stretch down the west coast of Shetland, accessed by bridges from near Scalloway on the Shetland mainland.  The islands have spectacular views towards the west, with the island of Foula on the horizon and to the south where you can see Fitful head and, on a clear day, Fair Isle.  To the east is the ridge of hills on Shetlands South Mainland. This ridge influences our weather giving distinct differences between the east side of Shetland and the west. Here on the west we tend to get more sun and less fog.

While being centrally situated with easy access to all areas of Shetland the islands of East and West Burra offer spectacular coastal scenery and sandy beaches.  We have easy walks over the short coastal grass where you can explore clifftop scenery and both sandy and rocky beaches.  You can walk from your door at Holmfield around the uninhabited southern peninsula of East Burra.  The open croft land teems with nesting birds in the early summer and the meadows have a succession of wild flowers.  Across on West Burra there is a large sheltered sandy beach at Minn and the smaller, popular, sandy beach at Meal.  You can paddle or, if you are brave, swim.

Holmfield is a short 3.5 mile drive to the nearest village, Hamnavoe, where you’ll find our well stocked local shop.  There is also a garage on Burra where you can top up on petrol and diesel.  From the busy little harbour at Hamnavoe with its fishermen’s houses there’s a walk over rough ground and rocks to the lighthouse.

Scalloway is only 7 miles away and it has two shops, a café, a pharmacy and a great local museum as well as the old Castle and a thriving fishing harbour with working shipyards. Lerwick, Shetlands capital, is 15 miles away from Holmfield.

Scotland has free access rights over most land, so you are able to walk almost anywhere provided you respect the interests of other people, care for our environment and take responsibility for your own actions.